The men’s elite race was dominated by twenty-year-old Alex Yee (GBN) with a time of 00:52:04 in first place, and the women’s elite race ended with an exciting eight seconds between Ai Ueda (JPN) and Summer Rappaport (USA).

The 2017 Discovery Get Active Weekend kicked off today in perfect weather conditions.

Discovery to host Get Active weekend in Cape Town

On 24 and 25 October, the streets of Sandton will be filled with runners and cyclists competing in South Africa’s first urban Duathlon, sanctioned by Triathlon South Africa (TSA) and the International Triathlon Union (ITU). The event, the first of its kind in South Africa, is also one of the qualifying races for the South African Duathlon Championships. 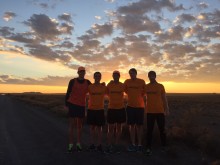 For the second year, a group of runners has conquered the distance between Johannesburg and Cape Town by foot to raise money for MAD charity, this year with the support of Team Vitality. MAD (Make a Difference) was founded in 2003 by Francois Pienaar to support the education of South Africa’s underprivileged youth.