The first day of the Discovery Get Active weekend drew to a close on Saturday 11 February with the triumphant ring of the South African anthem. The men’s elite sprint race was dominated by green and gold with Richard Murray in first place despite a 10-second transition penalty. He was followed closely by Olympic bronze medalist Henri Schoeman and Wian Sullwald in third.

Murray was unable to compete last year due to injury, and after two previous unsuccessful attempts at a podium finish for this race, he was thrilled with the win. He also said it was; “an exciting first for South Africa to take one, two and three on the podium.”

The women’s elite race ended in a nail biting finish, with a tenth of a second between Great Britain’s highest ranked participants – Lucy Hall (first) and Jessica Learmonth (second). They finished just under an hour at 59:34 and 59:35 respectively. Hall said she looked forward to competing again soon in South Africa but “it would have to be a sprint race in conditions as hot as today’s.”

“There were perfect conditions for all those who took part today, and fantastic crowd support for the elites. Our South African athletes stepped up and made their country proud. It’s been an exciting day from the first age group to the elite races,” said Gary Marescia, Discovery Get Active Weekend Race Director.

Discovery Limited is a South African-founded financial services organisation that operates in the healthcare, life assurance, short-term insurance, savings and investment products and wellness markets. Founded in 1992, Discovery was guided by a clear core purpose – to make people healthier and to enhance and protect their lives. Underpinning this core purpose is the belief that through innovation, Discovery can be a powerful market disruptor.

The company, with headquarters in Johannesburg, South Africa, has expanded its operations globally and currently serves over 5 million clients across South Africa, the United Kingdom, the United States, China, Singapore and Australia. Discovery recently partnered with Generali, a leading insurer in Europe, and has partnered with John Hancock in the US. These new partnerships will bring Discovery’s shared-value business model to protection industries in Europe and the US.

Discovery is an authorised financial services provider and trades under the code “DSY” on the Johannesburg Securities Exchange. 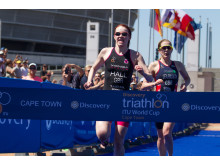