The Discovery Duathlon Sandton festival of fun happening this weekend!

Gauteng is gearing up for the first multisport event to be hosted in the heart of Sandton. Located just outside the Discovery offices in Sandton, the Duathlon has taken shape as the race village, expo centre and athletes’ transition area are prepared and ready.

On 24 and 25 October, the streets of Sandton will be filled with runners and cyclists competing in South Africa’s first urban Duathlon, sanctioned by Triathlon South Africa (TSA) and the International Triathlon Union (ITU). The event, the first of its kind in South Africa, is also one of the qualifying races for the South African Duathlon Championships. 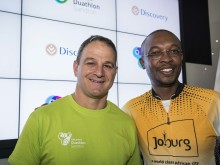 Today the foyer of the JSE was host to a unique executive RUN-CYCLE-RUN challenge marking the launch of the Discovery Duathlon Sandton scheduled for October later this year. In an effort to make people healthier whilst enhancing and protecting their lives, Discovery have partnered with the City of Johannesburg in support of the EcoMobility World Festival to be held over the month of October.