Recent harsh weather conditions combined with the weakening Rand and the labour environment have put a strain on short-term industry, leading to significant declines in insurers’ underwriting profitability over the past year, said Anton Ossip, CEO of Discovery Insure, on Tuesday.

He was speaking at the inaugural Discovery Insure Financial Summit held in Sandton, Johannesburg, which focused on challenges facing the short- term insurance industry with the view to empower financial advisers on how to deal with them. These include emerging mobile and digital technologies and the impact of changing weather conditions such as last year’s hails storms which caused massive damages to property across South Africa.

Ossip says a major focus for Discovery Insure, which covers more than R63-billion in personalised assets and pays in excess of R2-million in claims daily, has been reducing the cost of risk to both the company and its clients. This, the company is doing, through telematics which is the integrated use of technology to assess how a motor vehicle is being used.

By using telematics, Ossip said Discovery Insure has been able to come up with a unique package of benefits that has never been seen in the insurance industry before. A prime example is the recently launched Discovery Insure Driving Challenge App that encourages and rewards good driving. Launched two weeks ago, the App has 22,000 users at present and was in the top 3 downloaded applications in South Africa during its first week, surpassing Facebook.

He said since the launch of the App, Discovery Insure has seen many South African’s downloading the app with significant improvements in their driving

“In most cases, we have seen South Africans improve by 10 points over two days after downloading the application,” he said. “This just shows that people do improve as they get information about their behaviour.” Users of the App are scored out of 100 points.

Ossip said it is evident that it has become imperative for operators in the short-term industry to start thinking differently. In the case of financial advisors, focus now must be on becoming Risk Coaches, where the advice given to clients centres on assisting them to make choices that will help them lessen their risks and thereby  reduce their cost of insurance.

The conference also unpacked trends in other areas of the short-term insurance industry with leading experts such as Peter Rogers, CEO of NetAssets, sharing insights into insurance claims, and environmental scientist Simon Gear unpacking the meaning of changing weather patterns for companies.

Attendees also had the opportunity to interrogate the short-term industry’s regulatory landscape as part of panel discussion hosted with executives from various insurance bodies such as the SAIA, the FSB and the FIA, chaired by Themba Baloyi, Executive Director of Discovery Insure. These included Edite Teixeira-McKinon, Deputy Ombudsman for Short-Term Insurance; Caroline Da Silva, Deputy Executive Director of the Financial Services Board;  Justus van Pletzen, CEO of the Financial Intermediaries Association of South Africa; and Suzette Strydom, General Manager for Legal at the South African Insurance Association.

·  This pioneering product was created by leveraging the behavioural expertise developed in the Vitality programme with the latest telematics technology.

·  The unique Vitalitydrive programme encourages and rewards better driving behaviour and ensuring that vehicles are roadworthy.

·  At the heart of Vitalitydrive is the DQ-Track telematics device that measures and reports crucial aspects of driving behaviour.

·  Drivers on the higher driver status have 34% fewer claims than average or poor drivers (as measured    by Vitalitydrive).

·  Young adults between 18 and 25 can receive further discounts of up to 25% on their motor premiums. 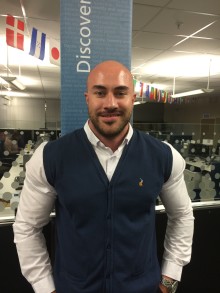