This year, the Discovery Health Sport Heroes Walk Against AIDS (DHSHWAA) will commence in Van Rynsdorp in South Africa on 18 November 2013 and culminate in Khayelitsha on 1 December, World AIDS Day.

This year marks the 12th anniversary of the Sport Heroes Walk Against AIDS, a non-profit initiative that seeks to use sport as a tool to change people’s lives. Each year, various South African sporting personalities walk from one province to the next, raising funds for HIV and AIDS hospices all over South Africa. Trained medical professionals also accompany the Sports Heroes in order to conduct HIV testing and counselling in the communities they travel through.

The 2013 journey will take the Discovery Health Sport Heroes to the Western Cape as they spread a message of hope through sport and healthy living in the ongoing fight against the spread of HIV/AIDS. Project participants believe this is a fight that can be won – a belief supplemented by the recent release of a global report on HIV and AIDS by the Joint United Nations Programme on AIDS (UNAIDS).

According to the report, AIDS deaths have dropped substantially over the last few years, with an estimated 1.6 million people dying of AIDS last year compared to about 2.3 million in 2005. In children, new HIV infections have halved since 2001 and in adults, cut by a third.

Discovery Health CEO Dr Jonathan Broomberg adds, “The 2013 UNAIDS report is encouraging in that it proves that through concerted efforts – be it education and prevention, treatment methods, ARV pricing negotiations or building infrastructure and human resources capacity – we can significantly stem the spread of HIV. We are proud to be involved with DHSHWAA. It is through initiatives such as this that South Africa has been managing this pandemic as well as we have so far. However, there is still much work to be done – while the HIV infection rate in South Africa decreased dramatically in the last decade, it remains the world’s highest.”

“As leaders in the private healthcare sector, we believe Discovery Health can contribute significantly to healthcare in our country as a whole. As such, investing in effective disease management and increasing access to quality healthcare to those living with HIV and AIDS, particularly in areas of critical need, remains a priority for us. Through our involvement in DHSHWAA, we reinforce our commitment to Discovery’s core purpose of making people healthier and enhancing and protecting their lives.”

Cynthia Tshaka, Project Coordinator of DHSHWAA, adds: “About six million people in South Africa are currently living with HIV. The funds raised and donated through this initiative go towards easing the burden of those affected by HIV and AIDS and its associated stigma. We are encouraged by the considerable impact this project is making in changing the lives of people in rural communities around South Africa.”

Says SASCOC CEO, Mr Tubby Reddy, “As a sports body, we entirely support the idea to use sport as a vehicle to address HIV/AIDS issues as we appreciate that sport and physical education can play an effective role in the fight against the pandemic. Sport and physical activity can also act as a means of raising awareness about HIV/AIDS and motivating behavioural change amongst the youth. Individuals who are HIV positive are encouraged to exercise and evidence indicates that involvement in sport may help to slow down the disease in affected individuals. We therefore encourage South Africans to attend the event and support the cause in the fight against the ailment.”

One of the project sponsors, the Road Accident Fund (RAF), decided to come on board after realising that DHSHWAA’s goal to connect with more South Africans resonated with that of the Fund. RAF Chief Marketing Officer, Nozipho Jafta says, “The 2012/13 financial year has seen a greater improvement in customer-centricity at the RAF. Initiatives such as our flagship campaign, ‘RAF on the Road’, where we take the organisation’s core service offering directly to disadvantaged communities across the country is but an example of this. We have also used various sporting and cultural platforms to meet the faces behind our claim files and their families – particularly those in vulnerable groupings such as runners, cyclists, pedestrians, public transport users etc.”

Other project sponsors include NLDTF, Super Sport, SASOL, Budget Car and Truck Hire, and Right to Care. The initiative is endorsed and supported by the South African National AIDS Council (SANAC) as the organisation’s flagship project in the sports and entertainment sector.

“Right to Care Health Services a wholly owned subsidiary of Right to Care is proud to be in partnership with DHSHWAA to raise community awareness around HIV. Through the sponsorship of USAID, RTC has continued to provide funding for RTCHS to conduct HIV counselling and testing in communities where the walk occurs. During November 2012 RTCHS conducted 1000 HIV tests in the Eastern Cape along the route of the DHSHWAA. The route this year takes RTCHS and the Discovery Health Sports Heroes through the Western Cape Province where we hope to reach more than 1000 people.’’ Said Dr Thembi Xulu MD: Right To Care Health Services.

This year, DHSHWAA will host a gala dinner at the SASCOC premises in Houghton on 7 November 2013 to raise funds for various hospices. Former South African Rugby Captain John Smit and Cameron van der Burgh have been confirmed as sport speakers for the evening. Mark Lamberti, CEO of Transaction Capital Limited and Chairman of Massmart, will be the guest business speaker, highlighting major role business plays in fighting the stigma and the spread of HIV both in the work place and society at large.

Discovery is an authorised financial services provider. It is listed among South Africa’s Top 40 companies on the Johannesburg Securities Exchange and trades under the code “DSY”. 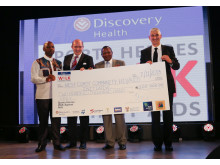 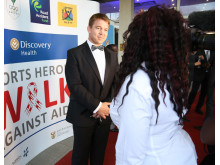 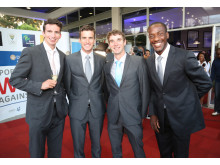 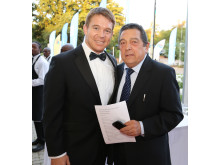