The 24th September, Heritage Day is a day on which we celebrate where we have come from, all that we are, and all that we strive to be. With over 10 000 participants lining the streets of Groenkloof, our country was celebrated just the way it should be – with a diverse range of communities bonding through a healthy day out on the Pretoria streets.

“Now in its second year, the walk proved a great day out for the whole family once again. Throughout the day we’ve witnessed all types of wonderful people from competitive walkers in the 20km, to pet-lovers and families in the more casual categories of the 15km, 8km and 5km. Added to this, some of our country’s greatest ambassadors brought their families and joined in including: Pierre Spies, Arno Botha, Kerry McGregor, Melinda Bam, Marc Mundell, Wayne Snyman and Bruce Fordyce.”

As if that wasn’t enough to ensure a memorable day out, there were performances from The Parlotones and Bobby van Jaarsveld – some of the country’s finest music on offer to end a perfect blend of South African heritage.

Perhaps the chart topper of the day was the giveaway of a brand new Kia Picanto which was won by an overwhelmed Diana Sehlatelo.

Sandile Mkari, Discovery Sponsorships Manager, says that there’s just nothing better than being a healthy and proud South African;

“I’m proud of all those who came out to enjoy the healthy sunshine, get their heart-rates up and fill their lungs with laughter. I challenge all those who did not take part to join us next year and earn yourself some well-deserved Vitality points!”

Discovery is an authorised financial services provider. It is listed among South Africa’s Top 40 companies on the Johannesburg Securities Exchange and trades under the code “DSY”. 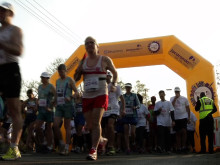