The Discovery Vitality Summit builds on the success of the annual Discovery Vitality Wellness and Fitness Convention which has drawn together leading local and international experts in the health and wellness industry since 2002.

This year’s prestigious event will enable not only health, fitness and sports industry professionals and role-players to share their knowledge and expertise, but will also provide the broader community with access to leading thinkers. Over 1500 delegates are expected to attend the Summit.

Says Dr Craig Nossel, Head of Vitality Wellness: “Globally, we are facing major health issues that impact on both the growth and the sustainability of our economy and our society. The Discovery Vitality Summit brings together top international thinkers to engage on the science and art of health promotion and prevention of disease.  We look forward to the diversity of views from the high calibre speakers that are assembled for the Summit”.

The prominent speakers at this cutting-edge wellness conference include Brian Wansink, the John Dyson Professor of Consumer Behavior at Cornell University; Tyler Hamilton, former professional cyclist and best-selling author; Adrian Gore, CEO of Discovery; and Prof Tim Noakes, co-founder of the Sports Science Institute of South Africa. One of the panel discussions will be chaired by Dr Derek Yach, Senior Vice President of The Vitality Group. The Summit will also include a wellness and fitness expo showcasing the latest in technology and wellness, and group fitness activities run by Discovery Vitality partners.

Topics under the spotlight will include “Health: the next frontier” (exploring new and increasing health challenges in a local and global context), “A debate on the science of nutrition”, “The psychology of wellness” and “Beyond sport”.

Says Morne Du Plessis, Managing Director at SISSA: “ The Sports Science Institute of South Africa (SSISA) is proud to partner with Discovery Vitality in bringing together some of the world’s most influential thought leaders an opinion makers in the field of fitness, wellness and excellence in sport. This summit will benefit all those with an interest in their own health and fitness, and sporting achievement as well as that of our nation. We at the Sports Science Institute of South Africa strive to promote sporting performance and health of all South Africans, through the execution, dissemination and application of science”.

One-day pass to Group Activities on 17 August only: R 700 per ticket

Brian Wansink directs the Food and Brand Lab at Cornell University. He is author of over 100 academic articles and books, including the best-selling Mindless Eating: Why We Eat More Than We Think (2006) along with Marketing Nutrition (2005), Asking Questions (2004), and Consumer Panels (2002). Wansink’s award-winning academic research on food psychology and behaviour change has been published in the world’s top marketing, medical, and nutrition journals. He will talk about “mindless eating”, why we get fat, and the impact of advertising on the world’s eating habits.

Tyler Hamilton was once one of the world’s top-ranked cyclists and a member of Lance Armstrong’s inner circle. Shortly after he reached his own personal pinnacle—winning the gold medal at the 2004 Olympics—he was found guilty of doping and exiled from the sport. In 2012, Hamilton released his memoir, The Secret Race: Inside the Hidden World of the Tour de France: Doping, Cover-ups, and Winning at All Costs. The book became an instant New York Times bestseller. At the Summit, Hamilton will ask the question ’What is the true price of winning at all costs?’ and talk about ‘The power of truth’.

Adrian Gore launched Discovery in 1992, and the company has since evolved into a diversified and multinational financial services group. Discovery is widely acknowledged as a global thought leader in wellness behavioural change. Gore sits on the World Economic Forum Global Health Advisory Board, as well as on the Massachusetts General Hospital Global Health Advisory Board. He will talk about creating a healthier nation and will explain how Vitality supports this big idea.

Prof Tim Noakes is Professor in the Discovery Health Chair of Exercise and Sports Science at the University of Cape Town. He is also Director of the UCT/MRC Research Unit for Exercise Science and Sports Medicine. Noakes has published more than 450 scientific publications and several books. In 2003, he received the UCT Book Award for Lore of Running, considered the “bible of the sport”. He has run more than 70 marathons and ultra-marathons. He will speak about sports development at the Summit.

Dr Derek Yach served as PepsiCo's Senior Vice-President of Global Health and Agriculture Policy before joining The Vitality Group in the US. He previously headed global health at the Rockefeller Foundation, was a Professor of Global Health at Yale University, and a former Executive Director of the World Health Organization (WHO). He also established the Centre for Epidemiological Research at the South African Medical Research Council. He serves on several advisory boards including those of the Clinton Global Initiative, the World Economic Forum, the National Institute of Health's Fogarty International Centre and the World Food Program USA. He will chair a debate on the science of nutrition and the advertising aimed at children.

Discovery’s core purpose is to make people healthier, and to enhance and protect their lives through financial products that clients need and want. 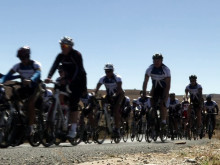