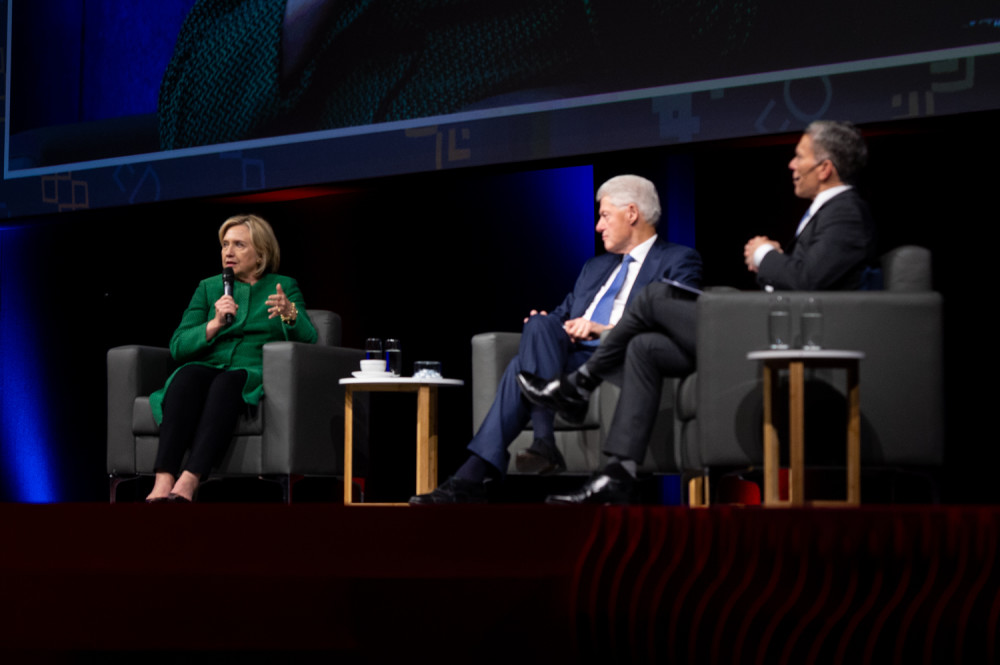 Hillary Rodham Clinton said a healthy society can be compared to a three-legged stool which stands when there is a functioning, effective and honest government; a productive, dynamic and successful private sector; and a flourishing civil society. “The legs have to be stable and equal,” she added. “And they are unequal in most of the world. There is work for all of us to do.”

Asked by Gore about their world view, the Clintons were hopeful about democracies around the world but cautionary, amongst other things about ungoverned technology and artificial intelligence possibly threatening job security in economies such as South Africa's.

“I think what we're going to find out in the next 25 years is this burst of democracy and comfort with diversity, and the restraints of democracy bringing people together. Life is hard, but it’s an exciting time. Overall, the world is in pretty good place and the problems are not insoluble,” said the US president. He cited extended life expectancy, reduced infant morbidity, amongst some of the reasons. “When president Mandela and I started out on Aids, there was no global fund on Aids and TB, or malaria, nor Gates foundation. People are now living longer with treatable conditions.”

Meanwhile, Hillary Clinton said the Ramaphosa government was hopeful for South Africa after a difficult prior decade.

“What citizens want to see is hope that is tethered to results. Part of what is going on in Europe and the US is that democracy is not delivering the kind of results that people want. Some of what they want is not as basic as other places, like South Africa, where you first have to deal with inequality, lift people up and create a diverse and inclusive society.”

They warned against “ardent populists” and singular narratives creating perceptions that situations were worse than they are.

“Democracy is worth its messiness,” he said. “The way president Mandela started out here was right, that more diverse groups always make for better democracies than homogenous ones. Hillary and I have spent our lives fighting an us-versus-them world. And it seems that all the walls in the world look more like nets now,” said Bill Clinton.

Responding to a question from Gore on the impact of local land reform policies on investor confidence, Hillary Clinton added: “There are different ways of approaching this. It is not a good signal to investors for wholesale expropriation. From what I understand there are willing sellers but they are still going into very few hands of what looks like politically-connected people.”

She suggested turning to international examples, even in Rwanda, which were important for sentiment and give faith to people in rural areas – communities which have proven in the US and the UK to swing votes in the wrong direction because “they feel stuck”. “If you're providing land, how productive is that land, what is the follow through?” she asked. The land issue could restore faith psychologically and economically to the country's disenfranchised citizens, but she warned about the impact on international investment.

“Hillary's right. Is it worth your reputation? I know you can get hurt if you do it wrong, and people in rural areas will lose hope. All these tough problems, I would put on the backburner and be aggressive about the low-hanging fruit that big business can actually tackle.”

He added that narratives about the country should not “trigger deep seated insecurities in people and empower the people who want to benefit from these insecurities.”

Hillary Clinton said the 3000-strong business leaders at the Sandton Convention Centre “have a big stake in making sure that democracy in SA, locally and globally, is upheld and stands up against corruption.”

The pair suggested that the internet was a powerful platform through which governments could make public all contracts and function-related efforts, spending of public funds and more, audited by an independent entity, as the former Secretary of State had done during her tenure, in relation to all Aid-related contracts. “This is one way to avert corruption,” said the former President Clinton. “A second point is to ensure that public-sector staff doing business with the private sector are not vulnerable to corruption,” added Hillary Clinton. “It takes two to be corrupt. Where people think that this is the only way to do business that is a problem. The government of Singapore takes pride in paying public servants more to prevent them from being corruptible and trained to be honest and effective. This is an excellent model to look into.”

Staying on the subject of technology, the Secretary of State emphasised the need to regulate Artificial Intelligence (AI): “When you have people of the calibre of the late Stephen Hawking, Elon Musk or Tim Cook saying, ‘wait a minute, this could get too far too fast’, we need to pay attention. This discussion needs to inform and guide the public as, left to our own devices we will continue to develop AI without comprehending its applications. I fear that AI is racing ahead so quickly ahead that in the absence of independent efforts that bring people together the world will just fall forward into whatever AI does to us, and it will be very difficult to pull us back and protect ourselves.”

President Bill Clinton added that there is a more mundane issue that should be first addressed. “Will the revolution in AI, robotics and nanotechnology kill more jobs than it creates?” He suggested this could become a runaway problem for countries like South Africa where unemployment is currently very high. The former First Lady added that driverless cars could, for example, wipe out a staggering number of drivers’ jobs overnight in the USA alone. “The most valuable commodity in the today’s world is your personal data. It has been used to feed AI a bloodstream of information that can be used in ways we would not have opted into or approved of, had we been given the chance,” she said.

Offering a closing motivation to the country, Bill Clinton concluded: “This is a great country. You have enormous potential; do not screw this up. Do what is in front of you. The work in hand is the most important thing.”